Laurus Myth is a Silicon Valley native of Chinese and Irish descent, her work centers around re-building a culture of gifting. In 2010 she served on the Board of Directors at the Santa Cruz Mountains Art Center for three years. Studying Fine Arts at the University of California, Santa Cruz, and completing her MFA in New Genres from the San Francisco Art Institute in 2017, her art practice has evolved through painting to include spatial design, public art, and social practice.

Laurus spent three months in Nepal to volunteer in environmental conservation. During her stay, she painted a total of ten murals for several communities and studied the first degree of Reiki. Her work began to flow visually and conceptually to spread awareness of all energy forms. Recent travels have also led her to experience the histories of ancient and modern Egypt, Peru, Thailand, New Zealand, Japan, and Cambodia. Finding a deep connection to every culture she permeates, Laurus celebrates the varieties of culture in her paintings. Her work portrays patterns, symbols, vibrations and experiences within nature and technology, expressing the constant search inward for spirituality and outward for a collective power.

Around San Jose you may find her murals scattered across the Utility Art Box Program. During each painting sessions, many people would give shout-outs and hollers from their cars during traffic. All of the positive feedback from the public is a reminder that artists play an integral role in human ecosystems. It can be rare to see an artist at work, especially in silicon valley, and it brings the potential for thinking differently. 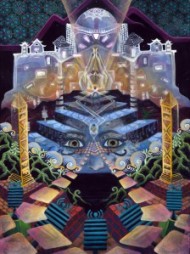 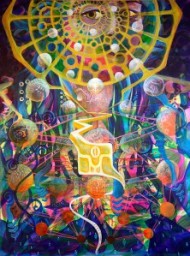 From This View A Self Portrait by LauruS Myth

A Night In the Valley by LauruS Myth 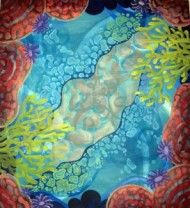 A Coral Extravaganza by LauruS Myth